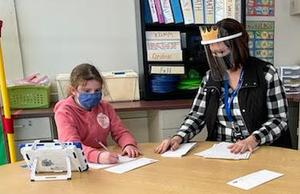 Fostering Relationships Between In-Person and Remote Learning Students
Colonial IU 20 Speech and Language Pathologist Kelly Hixon has bridged the gap between her in-person and remote learning students by instituting a pen pal program at the beginning this school year. Ms. Hixon's motivation was that she "wanted the students to build relationships that would normally be fostered in the classroom. They didn’t have the opportunity to connect face to face, so we went old-school."
The premise is simple, the in-person students have become pen pals with their remote learning classmates and send each other mail. She partnered with CIU 20 Life Skills Teacher, Michelle Hahn, to make sure specific skills were covered: elements of a letter, asking questions, answering questions, how to mail a letter, and what community helpers are involved in mailing a letter. The families of the remote learning students were given all of the materials they needed and both Ms. Hixon and Ms. Hahn were thrilled with the level of participation - 100%.
The flexibility of the pen pal program has created a fully inclusive environment. In describing one student's letter, Ms. Hixon notes that "he drew a picture and used stickers for his letter. His pen pal didn’t mind at all. They are all so accepting and understanding of each other’s abilities."
Ms. Hixon has been very creative in altering other traditional activities with students to comply with COVID protocols. Some examples include: holiday cookie challenge, the upcoming soup cookoff, and several activities involving volunteer community helpers. She has been a valued member of the CIU 20 team since 2008.