In Celebration of 50 Years of Service 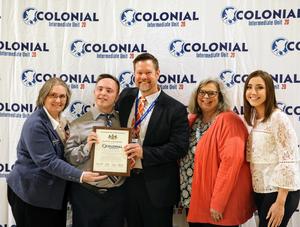 Colonial Intermediate Unit 20 held a 50th anniversary celebration on April 27, 2022 at Colonial Academy with representatives from its member districts, legislators, community partners, and other stakeholders. The official anniversary occurred in 2021, but the in person celebration was pushed to this year due to the pandemic. The event featured guest speakers that discussed the positive impact of Intermediate Units across the Commonwealth, and specifically the Colonial IU 20 region. Colonial IU 20 was presented with a Certificate of Recognition from the Commonwealth of Pennsylvania on behalf of Senator Mario Scavello, Representative Ann Flood, Representative Joe Emrick, and Representative Zachary Mako.

Refreshments were provided by a food truck operated by the Bethlehem Area Vocational-Technical School Culinary Program. Created in 1971 by the Pennsylvania General Assembly, Intermediate Units provide services to school districts in ways that create economies of scale, cost savings, and better efficiencies in the delivery of important programs and services to children, especially those with special needs. There are 29 intermediates across the Commonwealth.